Pompeii was a traffic area, because it occupied a topographical position of strategic importance for the commercial relationships with other populations. This position favoured the development of a cosmopolitan environment, therefore a flowering and a mixture of different religions.

Beside the first Osco - Samnite and Italic cults, the Pompeians loved Hercules, founder and protector of the city, to which, since the VI century B.C., they had devoted the Doric Temple in the Triangular Forum. To Hercules as tutelary deity of the city and protector of the vineyards of the Vesuvian plain, the Pompeians had associated Bacchus; his cult was very alive in the cities but especially in the countries, where he was invoked for the prosperity of the vines, primary source of profit and wealth for the Pompeian economy.
​
To Dionysus (Greek name of the god of wine) were devoted the gardens, where his presence was lived daily with the symbols of his cult (garlands of ivy, grape, satirical masks) and the images of the forest divinities of its cortege (Satyrs, Sileni, Fauns, Nymphs). 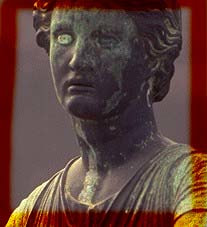 A privileged place in the religious sensibility of the Pompeians was occupied by Venus, original divinity of Campania protector of the agriculture; she was known in the city as Venus Synthrophos and Venus Physica, attributes of naturalistic matrix and was assimilated to the Venus Felix of Silla, protecting divinity of his gens, when in the 80 B.C. the dictator took power in Pompeii and assigned to the city the name of Colonia Cornelia Veneria Pompeianorum.
​
Instead, the assent to the Roman sovereignty was expressed with the cult of the Capitoline triad: Jupiter, Juno and Minerva. Jupiter, with the name of Jupiter Optimus Maximus was revered in the monumental Temple of Jupiter installed in the Forum. Even Juno was revered in the Capitolium, but the traces of her cult are not much evident.

Not less was the piety of the Pompeians to Minerva, that had been consecrated as protectress of the guild of the fulloni and since the Samnite age was thought patroness of the city gates. She was revered in the Capitolium and some paintings also testify the devotion for this goddess. Alive was also the cult of Apollo, that was divulged in Campania, in Etruria and in Rome from the Greek of Cuma 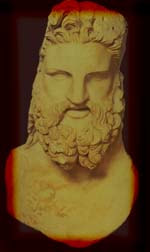 In Pompeii were allowed even the oriental cults, especially the one of Isis, protectress of the sailors; toward the end of the II century B.C. to this Egyptian divinity had been devoted a temple that was destroyed by the earthquake of 62 and subsequently reconstructed on Italic plant. The cult of Isis had a considerable number of believers and was lived in daily ceremonies and periodic celebrations.
​
An important place in the Pompeian heart was occupied by the cult of the lares, the religion  lived in the respect of the ancestors and of the divinities, close to its sensibility; they were revered with small offers in front of the domestic oratory and in the shrine of its house. The lares are ancient Latin divinities that, according to a theory, first guardians of the farm, would have become later protectors of the state, therefore of the house. 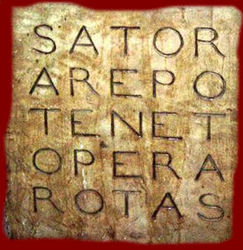 Some inscriptions in Jewish language, as the famous Sodom and Gomorrah, some statuettes and traces of Jewish onomatology, allow us to think about a Jewish presence in the city. There aren’t concrete testimonies, objectively certain, of a Christian presence in Pompeii, as a result of the different interpretations of graffiti, inscriptions and objects that refer to the Christians.

​Even the certainty of the Christian matrix of the cryptogram of the Pater Noster, the famous magic square graffiti in the House of Paquius Proculus and on a column of the Large Palæstra, (formed by five words of five letters, legible in all the senses, whose letters, decomposed and recomposed, form twice Pater Noster) has come less because of the criticisms of the researchers.

In spite of all, theoretically Christian presence in Pompeii is not to be excluded; it could be directly connected to the existence of Jewish groups in the valley of Sarno, who were the first able of receive the Christian message.