The commercial life in Pompeii was very productive: it is testified by the presence of numerous shops, taverns, workshops and inns, that let us suppose there was a production not only over the requirement of the city, but also destined to the export.

One of the products destined mostly to the export was the garum, a sauce of oriental origin, that was drawn fermenting at the sun the bowels of some fishes (mackerel, tuna, morey), that were changed in a kind of cream, subsequently sieved with the aid of wicker baskets. Once manufactured, was set in some jars and sold.
​
Because of the elevated number of bakeries at Pompeii, we presuppose that even the bread was a product exported in the near countries. In the mills there were different grindstones, manoeuvred by oxen or enslaved, that ground the wheat to get the flour, that was mixed and manipulated to get the forms (usually ring-shaped), cooked in the firewood ovens and exposed on the benches of sale. 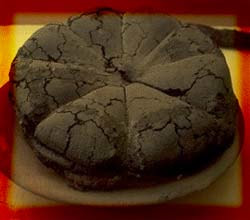 Even the amphoræ with the Vesuvinum, the wine produced by local grapes, were exported in Spain, in Gaul and in Britain.
​
The tabernæ and officinæ corresponded to the actual shops and laboratories: cloths, felt objects and textures were manufactured and were used for manufacturing togas, tunics, mantles and ribbons. The laundries and the cleaners’ shops were called fullonicæ and they washed the cloths, with vapours of sulphur and other particular ingredients in the water; to paint they used special containers. The cloths were dried in the sun and ironed, pressing them.

Important in the city was also the industry of the wool, furnished from the sheep of the Lattari mountains, that was sold in a special market open air.
Pompeii had also an harbour, of which we don't know the exact conformation, where the ships berthed to disembark their load; then, on small boats, the merchandises arrived inland going up again the course of the Sarno river.