The most important moment in the public life was the elections, characterised by the qualified and active sharing of the citizens, even of those people that didn't have the right to vote. To open the electoral campaign it was necessary to attend that the candidates had manifested their wish to compete for those positions to the magistrate entrusted of  presiding the poll, and that the names were published.

Only then the electoral campaign could start; it was the most alive part, more dynamics and more felt by the electors and involved nearly all the citizens. There was not preclusion for anybody because the media were limited: besides the oral propaganda and the recommendations remained, in fact, only the mural writings or the manifestos, paintings on the walls with red or black varnish on a layer of plaster. 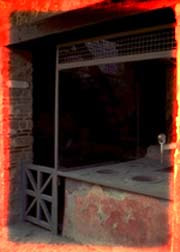 The electoral propaganda found its best place in the taverns and thermopolia, where in front of a warm dish, persons discussed better about the worthies of a candidate. Most of the electoral writings have been recovered along important streets, in the zones with more traffic or on the walls of the houses of influential citizens; the greatest part of the manifestos discovered belong to the last period of life in Pompeii, that is the years since 62 to 79 A.D..
​
Concerning the votes, all the free citizens (only men), without distinction of census and social class, had the right to vote. The city was divided in constituencies, that were the districts; the citizen, the day established for the elections, approached in the Forum where there was a building, the Comitium, already divided in sectors, and methodically voted in his section.

The vote was expressed in writing on a waxed tablet; completed the votes there was the scrutiny and the results were communicated, section after section, to the president of the electoral meeting that provided to gather them and to proclaim the chosen for every offices. The winner was the one that had been designated in the greatest number of sections, therefore it was not sufficient to have the absolute number of votes, to be chosen, but it was necessary to have success in more sections.