A terrifying eruption 4000 years before Pompeii 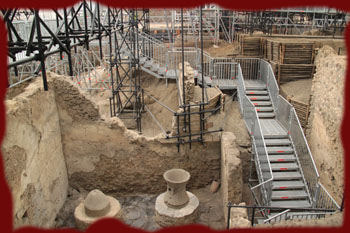 Till now we believed that the most violent eruption at the Vesuvius has been the one in Pompeii, in 79 AD, but a search of the Osservatorio Vesuviano – Istituto Nazionale di Geofisica e Vulcanologia (INGV) points out a more serious event in the Bronze Age (3780 B.C.): an eruption more violent and destroying of the one that made Pompeii and Ercolano disappear. So, the Vesuvius provoked an incredible proportions catastrophe, emitting a power never known till now.

The eruption had mortal effects in an area that extends up to 15 kilometres from the volcano; in all the studied sites are the traces of a dramatic escape: dishes left in the huts and imprints of men and animals that tried to leave the villages as soon as from the Vesuvius started to rise columns of gas and ash. The only bodies of which the rests have remained are of a man and of a woman, buried by the ash in a zone at about 17 kilometres from the volcano. Many others are dead when the concentration of ashes in the air has penetrated in the bronchuses, giving suffocation.

In that zone, according to the results of the researchers, lived 10.000 to 20.000 persons; most of them could estranging from volcano, but the eruption however provoked thousand of victims. When the survivors returned back to the villages, they tried to reconstruct them, as it is testified by the rests of the poles of the found huts. But the fields submerged by the ash were by now unluckily to cultivate. All at a sudden the whole social and agricultural structure of the villages was deleted and the whole zone remained uninhabited. 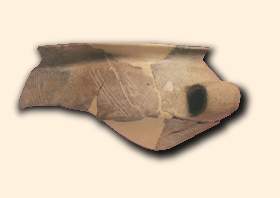 In 62 A.D. a catastrophic earthquake struck Pompeii and other cities of Campania (Herculaneum). Pompeii suffered many damages; in fact, at the moment of the volcanic eruption that buried it completely, some restaurations and reconstructions were still in progress.

Afterwards midday of August, the 24th of 79 A.D., the Pompeians saw a pine-shaped cloud fluttering on the Vesuvius; immediately after the gigantic stratum of solidified lava that obstructed the mouth of the crater exploded under the push of the gases and it flew in air shattering and transforming itself in lapilli that deposited on the city at a varying height of 2 or 6 meters and for a ray of 70 kms.