Discovered the villa where August died

The Roman patricians had chosen this area, Campania Felix, to build these luxurious villas to pass their time in peace, far away from clamor of the political life and from noisy Rome.
The beauty and the tranquillity of these places was so much that Tacito and Svetonio write that imperator August died in one of these magnificent villas near Nola (“apud Nolæ”), where there were many properties of noble Roman families.

In the 1932 Matteo Della Corte, inspector of the Soprintendenza di Napoli, when the Soprintendenza di Pompei e Ercolano didn't exist, effected an excavation in the area of Somma Vesuviana, because a farmer noticed something strange in 1929. The discovery, even though small and partial (an area of 5 x 5 ms), it showed that there was something important.

The excavations, situated in the place of Starza della Regina, in the commune of Somma Vesuviana, started again in 2001, thanks to the interest of University of Tokyo, in collaboration with the University Federico II and the University Suor Orsola Benincasa, and under the supervision of the Soprintendenza Archeologica di Napoli.

The archaeological site is found to the slopes of the Monte Somma, on the northern slope of the Vesuvius, in an area more times subject to the damages provoked by the repeated volcanic eruptions; an area where natural events and human vicissitudes had a secondary impact, in comparison with the coastal area, where excavations and archaeological searches started, at the beginning of the XVIII century.

The project is for seven year work, now it’s in the fourth year. The results are excellent because very important archaeological material was found. 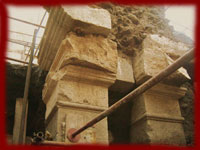 After the first year exclusively devoted to a recognition and geo-technical tests of the territory, in the 2002 started the excavation, that discovered in an area of ten meters for ten, the hole dug by the Della Corte.

In 2004 has been found a square structure with the pillars that sustain the arcs, realized not with bricks and mortar, but with great blocks of grey Vesuvian stone, outlined with frames of white limestone. The structure dates back to the last period of Roman Republic and lasted till V-VI century, than buried by an eruption.

The excavation has an area of 25 meters for 30, for a total of seven hundred square meters. Inside they found a courtyard which floor is deep about eight meters and half, and the structures inside are preserved for a height of six meters.

These structures with arcs are particular, they join two parallel walls which are distant fifteen meters. Other rooms connected to this courtyard has been found. If it is not the Villa of August, that villa belonged surely to a very important person, a senator or a patrician.
The factory, according to the prospecting effected with the geo-radars, is extended on a surface of thousand of square meters.