The restored Lupanare returns to its ancient shine 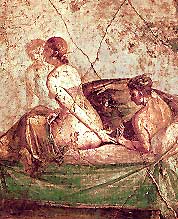 The "lupanare" in Pompeii was discovered in 1862 and it immediately was restored; the second time it was restored was in 1949 to repair the damage of the Second World War. In the year 2000 the infiltrations caused by the bad weather, the structural problems caused by a great number of visitors, the damages of paintings made very serious the situation of the whole building. At the beginning of 2001 a project was prepared for the restoration of it and it ended just lately.

The project was prepared for the external and internal structure with the various paintings and, obviously, didn’t modify the general aspect of the building. The damaged parts have been repaired applying technical methods similar to those of the Roman epoch.

In order to leave the monument in its original state (or, for better saying, in the way we have after so many years) the building was restored only in the necessary parts. The internal paintings have been examined in the laboratory and then restored, because one of the problems of the paintings is the separation from the walls cause of the damp.

Protective plates inside the building have been applied to avoid the damage caused by visitors that, unintentionally, scratch the walls with the bags; these plates have not been applied directly on the painting because it need to transpire otherwise it jeopardizes the state.

Inside the "lupanare" in Pompeii recently restored it has been installed a system with sensory to infrared rays for the survey of people. There are two levels of control: one of the surfaces and another of the influx of visitors.

The first one allows a series of useful investigations for the evaluation of the state of degrade of the paintings and of the causes that determine it, through sensory that notice the temperature and damp of the environment, of the walls and of the surfaces, and the percentage of carbonic anhydride inside the environment.

Sensors always send by radio the data to a switchboard that gives a sign of alarm every time some parameters are overcome.

Visitors’ control is made thanks to infrared cells which send signs of alarm if more than nine persons try to enter together.