The Suburban Baths were built at the end of the first century B.C. against the city walls north of the Marina Gate.

This is one of the city's most ancient temples. Stratigraphic studies certify the cult's existence since the sixth century B.C.. The current arrangement dates to the Samnite period, though it was restored numerous times in the imperial Roman period.

The sanctuary was surrounded on three sides by a portico with Ionic columns made of tufa, which were stuccoed and transformed into Corinthian columns after the earthquake of 62 A.D.. The temple, which is of Italic type, is raised on a high podium. The cell decorated with a mosaic of perspective cubes (scutulatum), contained the statue of the god and a stone omphalos; symbol of the world's navel and venerated in the sanctuary of Apollo at Delphi. In front of the temple is an altar of the republican period and a column with a sun-dial. Placed in front of the portico are the bronze statues of Apollo the archer and his sister Artemis.

The Mensa Ponderaria, or rather the Weights and Measures Office, is situated in the immediate neighborhood of the fruit and vegetable market. It contains a table with the legal measures of weights and volumes.

The municipality established it so as to impede arbitrary measurements by the merchants. In the large limestone slab there are nine circular cavities, each of which corresponds to a measure. An opening at the bottom allowed the weighed merchandise to fall out. The  mensa predates the foundation of the colony and since Oscanmeasures do not correspond to Roman ones, in 20 B.C. a commission conformed the cavities to the new units of measures.

The portico with a façade with eight pillars on the west side is commonly know as the Granary of the Forum. In reality it is actually a cereal and legume market.
​
The building's front has eight openings. The interior walls do not have traces of decorations, a sign that in 79 A.D. the building was not finished. Today it is used as an archeleological warehouse. Amongst the most important finds stored here are: various types of amphoræ; casts of dead people, trees and trunks; and tufa sculptures such as the Relief of Issius, the pediment with Dionysius and Ariadne from the Sanctuary of Sant'Abbondio, and the image of the Thracian gladiator.

The Capitolium rises in the middle of the north side of the Forum, with Mount Vesuvius as a background. It was the  colony's major temple. Consecrated to the Capitoline Triad, composed of Jupiter, Juno and Minerva, the edifice stands on a high base equipped with repositories where the city's treasure was probably kept. The façade was covered with white stucco, imitating marble. At the sides of the temple a monumental scenario of arches closed the square of the Forum.

The Macellum was built at the beginning of the first century A.D. and was a huge food market. In fact its name is derived from the Greek word makello which means to sell. Past the grand portico decorated with statues, is the large open air inner courtyard, at the center of which there was a circular building (thólos). Against the back wall there is a shrine which contained the statues of the emperor and members of the imperial family. Today, these statues are exhibited at the National Archaeological Museum of Naples.

The Sacello Larum pubblicorum (Sanctuary of the Public Lares) was used for the veneration of the gods protecting the city. This completely bleak and broad building was once entirely covered with marble and decorated with statues. During the holidays, its proximity to the Temple of Vespasian permitted to celebrate at the same time the gods protecting the city and the emperor as a benefactor of the city.

The building, built after the earthquake of 62 A.D. was intended for the practice of the imperial cult.

In the back cell, placed on a high podium, was the statue of the emperor. In the arcaded square the crowds assembled. At the center is a marble altar used for sacrifices with a representation of a priest that is preparing to sacrifice a bull during the inauguration of the building. On the other  façades there are sculpted reliefs of the civic crown and liturgical instruments.

The building functioned as the cloth market. On the façade were displayed the statues of Æneas, Romulus, Cæsar and Agustus. The vestibule seemed like a gallery of commemorative statues. The entrance portal was framed in marble, decorated with spirals of acanthus populated with birds, insects and various small creatures. At the entrance is a small room with a vase used to collect the urine utilized in bleaching cloth.

The fabrics were sold on stalls which aligned the edges of the central courtyard, while the rear corridor  with windows was used as a warehouse. Placed in the apse in the back was a statue of the Augustan Concordia. The building was built a little after 22 A.D. by Eumachia, priestess of Venus, who upon the death of her husband inherited the management of a wool industry. The guild of cloth manufacturers (fullones) nominated her as their patron and dedicated a statue to her, that was placed in the rear of the back apse.

The Stabian Baths are Pompeii's oldest baths. The name of the building derives from its location at the crossing between Via dell'Abbondanza and Via Stabiana. Built in the second century B.C., they were extended with the establishment of the Roman colony. During the imperial age they were restored a first time and a second time after the earthquake of 62 A.D.. Restoration works were still in progress when the eruption occurred, so the  facility was not yet ready for use. The main entrance leads straight to the gymnasium surrounded by a colonnade. The gymnasium has an open bathing-pool (natatio) and a large hall used as cleansing and dressing room (destrictarium).

The facility is divided into a men's section and women's section, with the usual sequence of frigidarium, tepidarium and calidarium. Its ruined condition caused by the earthquake of 62 A.D., permits an understanding of how heat circulated both in the interspace of the walls (concameratio) created by the use of spacers (tegulæ mammatæ and tubuli) and under the floor lifted up by means of little pillars (suspensuræ).

It’s composed by two communicating residences, that show the wealth of the owners, Siricoand Nummiano, probably brothers or partners of the same commercial company. On the floor of the entry it has been found a iscription that hymned to the profit (Salve lucru). The atrium is “tuscanic”, with marble impluvium and fountain; the oecus is decorated with small pictures rapresenting Orestes and Pylades, Mars and Venus, Diana and Endymion. 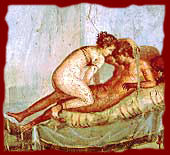 It’s the only Lupanare in Pompeii, but we must remember that only the 2/3 of the ancient city have been discovered. This doesn’t mean that it was the only place in which the sexual commerce was practised. It was, however, the only place in which the sexual commerce was practised in “notorious and indiscriminate” way as it’s defined by the Roman right: it means without the possibility to choose their clients. In fact in Pompeii there were other forms of prostitution but that according to the Roman right it was nor prostitution: for the staff, masculine and female, of the thermal baths and of the taverns it was common practice to have sexual commerce with the clients. But for the law this was not prostitution because it wasn’t “notorious and indiscriminate”.

The mills are composed of two millstones of volcanic rock and a brick base to hold them. The lower stone (meta) was conical, while the upper one (catillus) was hollow at the top and biconical.

Using a wooden framework with two jutting arms it was turned either by man-power or by mule-power and they took up the whole area of the floor of the mill. The grain was poured slowly into the cavity of tha catillus, crashed between tha surfaces of the two stones and collected as flour around the circular stone base which was protected by a thin sheet of lead. Tha presence of the counters for kneading dough, the ovens and the shops for selling, all next to the mills show that tha bread industry was still primitive in ancient times.

The building, constructed at the beginning of the first  century B.C., was seriously damaged by the earthquake of 62 A.D.. The staircase, interrupted by the altar at the bottom, was enclosed with a low railing.

In front of the cell is an ample pronaos with marble Corinthian columns; while at the end of the cell is a tabernacle with four statue nooks, amongst which that of Augustus and the inscription dedicated to the founder, Marcus Tullius. The temple was dedicated to Augustus, who was declared pater patriæ in the year 3 A.D.. As testified by some of the inscriptions, the priests of the temple formed the College of Ministri Fortunæ Augusti and every year were under the obligation to place a small statue in the chapel. On the cross-roads north of the temple, at the entrance to Via di Mercurio, there once stood a commemorative arch surmounted by a bronze statue, of which many fragments have come to light.

These are the only ones to be functioning again after the earthquake of 62 A.D.. They are furnished with a heating system (præfurnium) and two sections, male and female. The distribution of hot air was done through cavities in the walls and the double floor on small pillars (suspensuræ).

The men's section had a dressing-room (apodytherium). From here one passed first to an environment for the cold bath (frigidarium), then to a warm bath (tepidarium), and finally to room for a hot bath (calidarium). The tepidarium has nooks sustained by Telamons and a bronze brazier, donated by M. Nigidius Vaccula. The calidarium was equipped with a tub for the hot bath and a marble basin for cool water ablutions; an inscription in bronze letters states that it was paid for by public money and placed there by the mayors at the cost of 5,250 sesterces.

Here there are the Forum Baths (80 B.C.), well preserved, the House of the Tragic Poet, with the famous mosaic of the watch-dog with the inscription “cave canem” and the House of Pansa, in Samnite style, one of the greatest of the city, with a garden that it extended on the whole insula.

At the corner of Via del Foro there is the Temple of the Fortuna Augusta, erected by the order of Marcus Tullius in the 3 B.C. in honor of the emperor Augustus. Further up, there is the House of the Faun, one of the widest and noblest residences of Pompeii, erected in the II century B.C., but full of Italic and Hellenistic elements. From its environments it comes a lot of beautiful mosaics exposed at the National Archaeological Museum of Naples.