House of the Citarista
​
It’s one of the most luxury houses of Pompeii (Roman period); it takes the name from the bronze statue of Apollo Citaredo (National Archaeological Museum in Naples). It’s the result of the fusion of two big houses; is has two atria and three peristyles, richly decorated with pictures and bronze groups of animals.

House of the Achilles’ Lararium​
​
The lararium is covered by fine decorations; beautiful is the frieze under the vault of the small environment, composed by hundreds of small fragments: on a dark blue background there are some representations of the last book of the Iliad, in plaster bas-relief. Because of many fragments of chalky limestone in the peristyle, it’s supposed that the house was being reconstructed when the catastrophe struck the city.

This laundry (fullonica) is a typical example of a Pompeian “shop-house”, where the shop is on the ground floor and the house is on the upper floor. Clothes were washed, dyed and ironed here. At the entrance we find what remains of a press (pressorium). The impluvium, or pool, in the atrium had been transformed into a tank.

​Clothes were washed and dyed in small rooms at the bottom of the garden; connected tanks and small tanks  used for pounding can be found there. In fact, the wash soaked into degreasing liquids was pounded with feet (saltus fullonici). A kitchen and a small latrine were at the disposal of the workers.

This house takes its name from a luxurious covered corridor  (cryptoporticus). During the last period of the city it was used as a depot. That's why about sixty wine amphoras were found here. The house has a small  private  bath. The elegant three-winged underground passage was created to permit a walk even in case of severe weather conditions. The owner had a copy of a picture gallery painted on the walls.

The decoration shows a labyrinth on the skirting board and a wall with large red slabs (orthostats) separated by herms. The upper part shows scenes from the Trojan war, from  the Plague in the Achaean  field to the Funeral games in honor of Patroclus. At the end of the corridor the visitor found at the  center of the back wall a representation of the escape of Aeneas from Troy with his father Anchises and his little son Julus. This scene constitutes the link between the Greek myth  and the history of Rome: it was after the fall of Troy and the escape of Aeneas towards the coasts of Latium that his son Julus founded Alba Longa, from where Rome rose. This story represents the  main theme in Virgil's Æneid too.

Among the several casts found in the garden of this house there is one of a mother protecting her little daughter and another of a slave with fetters at his ankle.

House of the Chaste Lovers

The name of the house derives from the motives of the paintings showing lovers  during a feast. This is a typical “shop-house” with the bakery on facing the street and internal living quarters. The large bakery is equipped with oven with millstones.

​The skeletons of the mules used for the loads of grain were found in one of the stables which opened on the southern alley. The house has elegant paintings. Decoration works were still in progress in one of the halls on the day of the eruption. Thus, there are completed parts and portions still being prepared with graffiti and preparatory drawings (sinópie).  Little cups containing the colors, a small stove and a compass were found under the collapsed  vault. The flower-beds in the garden could be restored thanks to the holes left by the reed fencing.

This house, like the House of the Cupids, belonged to Quintus Poppæus. His family, the Poppæi, were very influential and were relatives of the Empress Poppæa Sabina. In  the right corner there is a lararium (domestic  oratory) in the shape of a little temple.
​
A hall decorated with paintings of the Iliadic cycle opens on the atrium: Ulysses tearing Cassandra away from the Palladium (but it is Ajax in the Homeric version), Cassandra, The Trojan Horse and Laocöon. The garden (peristilium) is closed by a parapet decorated with herons. On the northern side there is a room (oecus) with a green background and on top a frieze portraying the rape of the Lapiths women by the centaurs.

At the center of the floor there is a small mosaic portraying pygmies on the Nile. At the bottom of the garden there is a library, a private  votive chapel and a rectangular exedra framed by two other exedras with apse. In the central exedra there is a painting of two sitting poets:  the one reciting is Menander, while the other one is probably Euripides. The exedras with apse are decorated with Artemis and Aphrodite.

The  private votive chapel contains a domestic oratory made of masonry; there we can see two casts of the wooden portraits of the ancestors (imagines maiorum). The reception rooms are on the eastern side of the garden. At the center there is a huge hall (oecus triclinare). The house has a small bath area. The reconstruction of a farm cart (only parts in iron and bronze are original) is exhibited in the stable (equile). A case containing 118 pieces of silverware weighing 24 kilograms was hidden in the basement of the house. The silverware is exhibited at the National Archaeological Museum in Naples.

House of the Ephebe

This is the typical house of the middle-class. It is the result of an aggregation of two houses with three entrance doors.

At the center of  the floor there is an emblem made of polychromatic marble inlays and glass pastes (opus sectile). The masonry counter of the triclinium is decorated with paintings portraying Mars and Venus with a castellum aquæ. During the summer, meals were served in another dining-room (triclinium) located in the garden under a pergola and near a fountain. The House of the Ephebe is named after the classical bronze statue (National Archaeological Museum in Naples) adapted to a lamp-holder (Efebus  lampadophoros) was founded in the house.

​The house is generally attributed to the baker (pistor) Paquius Proculus, who became a mayor of Pompeii. According to widespread electoral propaganda, he was the most influential citizen in this quarter of the city. The floor is a carpet of mosaic; the entrance section portrays a dog tied to a leaf of the door, while the floor mosaics in the atrium are  divided into panels portraying different animals. The courtly rooms and lodgings open  on to the garden in the back. The skeletons of seven young boys were found in the exedra.

House of the Sacerdos Amandus

​There is a notable triclinium, adorned with a beautiful decoration and frescoes representing Polyphemus and Galatea, Perseus and Andromeda, Hercules in the garden of the Hesperides, Dædalus and Icarus. In the small peristyle it has been drawn the cast of the root of the only big tree that shaded it.

House of the Impluvium

​Even this house was being reconstructed after the earthquake of 62; it has a grandiose atrium and the tablinium, a rich decoration of the basin of the impluvium, dressed of mosaic and an inlay of polycrome marble and, in a cubicula, a gynæceum scene. 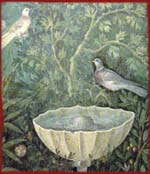 House of the Golden Bracelet

In the triclinium of the house it has been found in fragments, then recomposed, a fresco of a garden that shows a luxuriant vegetationreproduced with minute care, in which fly every type of birds; aloft a round oscillum of marble is suspended.

The oscillum are big circles in marble, that were hung to oscillate and to be visible from both the sides; very used in the ornamentation, they were decorated with reliefs figures. Many have been found in Pompeii, most of Dionysiac subject; a variation is the oscillum of pelta form or crescent, that was the preferred shield of the Amazons and Dionysus, adorned with reliefs or with griffons heads. 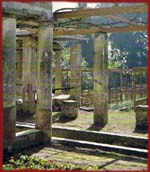 House of the Orchard

​Two cubicola of this house with the painted walls preserve the reproduction of two lemon trees, full of fruits; besides, in other paintings, there are orangesand limes.

It has been proven that the reproductions of fruit in Pompeians paintings are tightly realistic, therefore, they have an undisputed documentary value. It results that the common history about diffusion of the citrus fruit is wrong: the historiographers agree affirming that the citrus fruit were brought from India in Africa from the Arabs, that were the first ones to cultivate it in Sicilyin the X century; the Crusaders spread it in Italy. But, it seems that lemon, lime and orange trees were acclimatized and cultivated in Campania since the I century A.D..

​The bakery (pistrinum) of Sotericus in Via dell'Abbondanza is one of the largest in Pompeii. The  name of its owner was obtained from an inscription on an amphora. In addition to the millstones operated by mules, it conserves the oven and the kneading machine.

A small portico was used as vestibulum of this house, which had been converted into a country-house with wine-cellars for the cultivation and production of wine.

In 1961 in the layer of ashes the impressions of thirteen victims of the eruptions were found. They dah remained in the house during the fall of the lapilli and then attempted to escape under the ashes. They suffocated to death however and fell one after the other in their family groups. The casts were obtained using Fiorelli’s system of pouring plaster into the spaces left. This represents one of the most dramatic examples of the death of Pompeii and its people.


Along this street we find Stabian Baths, the most ancient and complete thermal baths in Pompeii, with annexed a gymnasium, that  occupied the area of a whole insula, together with many shops. In front of the thermal baths it is found thePistrinum of Modesto, in which lava millstones have been recovered. Close to it, is the Temple of Zeus Melichios, the smallest of the city; two big statues of Jupiter and Juno and a bust of Minerva were found there. Via Stabiana finishes at Stabia Gate, one of the most ancient of Pompeii.

​It is considered one of the most ancient of the city; at its sides there are boundaries of calcareous stone. In the passage there is a Oscan inscription; outside, a Roman headstone remembers the road paving made by the order of duoviri L. Avianiusand Q. Spedius.