This house takes its name from a Sallustius mentioned in an electoral inscription painted on the façade. The last owner was Cossius Libanius. The building is Samnite and dates back to the third century B.C.. The decoration imitates marble slabs which are actually made  of stucco in relief. The inn next to the entrance lets us suppose that the crisis following the earthquake pushed the owner of the house to partly use it for profitable activities.

It is one of the best examples of pre-Roman residence (Samnite period). It has a small peristyle with hexagonal columns and post-Augustan decorations, with other adjacent environments (gynæceum); on one of the walls it was represented the myth of Diana and Atteone, destroyed during the last war.

House of the Tragic Poet​

Excavated in the years 1824 to 1825, the residence represents a typical Pompeian house with an atrium and peristyle. Decorating the floor in the entrance is the famous mosaic Dog tied to a chain with the words Cave Canem (Beware of the Dog!).

The decorative elements in the house include famous paintings and mosaics, which today are almost all in the National Archaeological Museum of Naples. In the atrium were paintings of scenes from the Iliad, such as Achilles and Briseis and Zeus and Hera; placed in the tablinum were mosaics which portrayed Theater actors  (which gave the house its name) and a painting of Admetus and Alcestis; found in the peristyle was the famous Sacrifice of Iphigenia; the triclinum, next to the portico, was decorated with mythological subjects: Venus with the nest of Cupid, Ariadne abandoned and Diana. 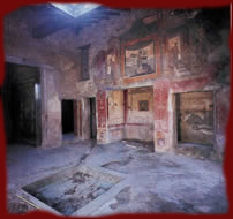 House of Narcissus or Maxim Altar

The house belonged to a man of the middle/low class. The owner of the residence, or at least its inhabitant, it remains anonymous; even his profession or type of activity that took place in his shop have not been elucidated, despite the presence of a large number of bronze instrumentsand an unusual bronze table with Egyptian sphinx crouching at the base of support.
​
What remains of the perimeter wall of the house is dated around the Third century B.C., but inside the house you can imagine the presence of older structures, without any precise data on their types and sizes.
The paintings on the walls are largely preserved.

House of the Large Fountain and the Small Fountain​

The fountains, with a niche shape, are completely covered by rich mosaics, composed by impasto of glass. In the House of the Small Fountain, around the niche, there is a beautiful landscape that represents the sea and some houses on the shore. In the House of the Large Fountain there are some copies of bronze statues representing a putto with a dolphin and a fisherman.

House of the Black Anchor

It takes the name from a mosaic visible on the floor of the entry. It has a beautiful garden, placed at a lower level, with niches to apse and an elegant colonnade.

House of the Faun

The House of the Faun covers 3,000 square meters, an entire city block. Its grandeur and elegance is extraneous to the mediocre  surroundings of Campania, but is rather comparable to the princely residence of Pellas in Macedonia. It was built in second century B.C., during the Samnite period; it takes its name from the discovery of a small bronze statue (a dancing Faun) in the atrium. In 1831 on the exedra's pavement in the first peristyle, an enormous mosaic (5.12 X 2.77 m.) picturing the battle of Issos (333 B.C.) between Alexander the Great and Darius III of Persia. It is probably the mosaic copy of a famous painting of the Greek painter Philossenos (fourth  century  B.C.); a million and a half tiles (tesseræ) were needed for its execution.
​
The original mosaic is in the National Archaeological Museum in Naples and it has recently been reproduced with stones similar to the original ones (cut by a special machine and then hand worked reducing the stone to tesseræ of a millimeter and half) and put back in the exedra of the house.

House of the Golden Cupids

This name was given to the house after the find, inside a cubiculum, of little glass disks with cupids engraved on gold leaf and inserted into the painted wall. The owners belonged to the family of Poppea, Nero's second wife.

The garden is very peculiar. Originally it was decorated with arble sculptures, hanging disks (oscilla), herms and theater masks. The domestic oratory (lararium) was dedicated to oriental gods painted on the wall: Isis, Serapis and Arpocrates. The decoration of the black hall is particularly elegant. After the earthquake of 62 A.D. it was restored with paintings portraying Achilles and Briseis,  Jason meeting Pelias before fleeing with Medea and Thetis in Vulcan's Workshop.

The House of the Vettii displays the refinements reached  by the wealthy Pompeian bourgeois in the first century A.D.. From the entrance, where a Priapus is painted, one passes to the Tuscanic atrium where wooden chests containing the family's treasures were displayed. Three large rooms open up to the garden.

House of the Labyrinth​

This noble house, that dates back to the Samnite period, has two atria and a large peristyle. The name derives from a mosaic which portrays the Fight between Theseus and the Minotaur in the Labyrinth. The sumptuous main hall is of the type described by Vitruvius as oecus corinthius; it has ten columns leaning against the walls that stress the spatial effect of architectonic paintings. The house had private baths and a bakery equipped with three millstones.

It has a graceful peristyle with a large pool in the garde; opening off it a hall with a colonnade round the inner walls (a so-called oecus corinthius). In another big room there are rests of a fashionable decoration.

Its façade is in Italic style, but inside it is decorated in the fashion of the last Pompeian period. Behind the tablinum there is a fountain with a cubicula; on the external wall a mosaic represents Achilles and Scyrus, while another one represents scenes of the Musical competition between Apollo and Marsyas.

The Tower of Mercury (or Tower XI) is located at the end of the street bearing the same name. The tower still bears the signs caused by Silla's catapults during the siege of 89 B.C.. Once there was a gate here. This is a two-storey tower which has an inner staircase leading downstairs to a postern and upstairs to the embattled rounds path that ran along the walls.

House of the Surgeon

This house built with limestones taken from the Sarno river dates back to the fourth century B.C.. Its name comes from the find of a set of 40 surgical instruments made of bronze and iron such as pliers, lancets and forceps. These instruments are exhibited at the National Archaeological Museum of Naples.

At the end of this street there is the Tower of Mercury (or Tower XI), part of the fortification built in 89 B.C., before the conquest of Silla. Alongside this road it rises the House of the Black Anchor, so-called from a mosaic recovered on the floor of the entry, the House of the Large Fountain and the Small Fountain, with a beautiful fountain made as mosaic, and the House of Apollo, decorated in the style of the last Pompeian period.

On it there is the entry of the House of the Labyrinth, of Samnite period, that takes the name from a picture on the floor of a room, that represents the myth of the Minotaur in the Labyrinth.

Alongside this street we find the House of Sallustius, the House of Surgeon, so-call for the recovery of some surgical tools, a pistrinum and a building that acted as center for the guild of the employed workers at the salt-pans. The street finishes at Herculaneum Gate, the most important of Pompeii.

The House of the Vettii leans on it, one of the most luxury in Pompeii, that belonged to rich merchants. It’s decorated by beautiful frescoes, following the 62 A.D. earthquake, that represent one of the best preserved examples of the ancient paintings came up to our days. The alley finishes at Vesuvius Gate.

Perhaps this is the most interesting part of the fortifications in Pompeii. The gate looks toward the city of Herculaneum. It has three barrel-vaults, within which are two passenger-ways and one vehicle-ways. The technique of construction has been defined mixed, because  rocks and tufo were used for its building. In the last phase it didn't have defensive functions.

Necropolis of the Herculaneum Gate

This gate owes its name to its position: it looks towards the city of Herculaneum. It had three arches, a bigger one for carts and two smaller ones for pedestrians. The necropolis bearing the same name lies just beyond the gate. It has beautiful graves, with seats  (schola), mausoleums and in the shape of chambers.