Pompeians lived sex without inhibitions, as in all the cultures in evolution, because it was considered entirely natural. The Phallus was seen as a symbol of fertility, abundance and good fate; it was represented next to the fountains or, in shape of bell (tintinnabulum), hanged on the walls of the houses to keep the evil away. 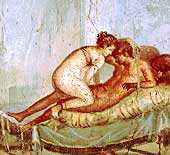 The prostitutes were divided in castes: the delicatæ and the famosæ were cultured girls, able to entertain the best customers; the lupæ attracted the customers with a kind of howl; the bustuariæpractised the profession in the outskirts of funeral monuments; the scorta erratica were the streetwalkers; the blitidæ were prostitutes of inns; there were also the gallinæ, the forarie, the quadrantarie, the diabolaiæ.